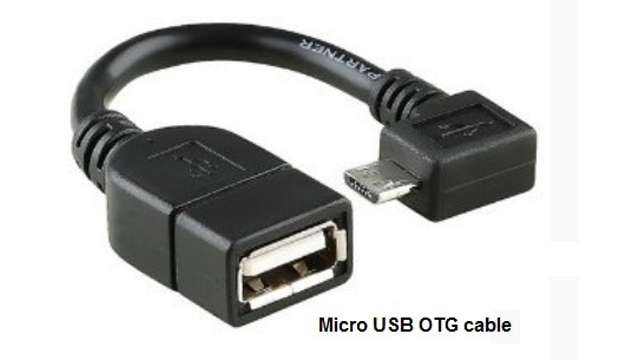 Clever adapter connects USB accessories to your Android device, With an inexpensive USB OTG adapter, you can connect things like keyboards, USB hard drives, and even gaming controllers to your Android phone or tablet.
With the Andorid smart phone  Camera Connection Kit allowing users to connect a variety of unexpected USB devices  like a MIDI keyboard to their iPads, the next logical question was, Is there something similar for Android?
Although it’s not advertised or sold by any of the big Android phone manufacturers, the solution is a cheap cable called a USB On-The-Go adapter.
USB On-The-Go, or USB OTG, is essentially a female USB port that plugs into the Micro-USB port of a phone or tablet, allowing you to connect devices that use a standard USB 2.0 or 3.0 connection. In a nutshell, the adapter allows the Android device to be a “USB host,” powering and communicating with the connected device.
With the help of this crowd sourced chart, and some of our own testing, we found that the following devices are compatible with USB OTG:
Samsung Galaxy S II (S2)
Samsung Galaxy S III (S3)
Galaxy Nexus*
Nexus 7*
Droid RAZR
Samsung Galaxy Tab
Acer Iconia Tab A200
Acer Iconia Tab A500
Archos G9
Notion Ink Adam
Motorola Xoom
Toshiba Excite 10
Sony Tablet S

Use this clever adopter  and enjoy!!!