Both Samsung Galaxy S3 and Apple iPhone 5 smartphones are a few months old now, with each having their own followers. Some argue that Apple products only imply quality and that is demonstrated by the light-in-weight, attractive looking. There are also an equal number of Samsung Galaxy S3 fans who just love its customizable features, its long battery life and relatively affordable price.

Apple iPhone 5 and Samsung Galaxy S3 are both quite popular. However if the price factor is taken into account, then Samsung Galaxy S3 is a bit cheaper than Apple iPhone 5. This is one of the reasons, why its sales have soared in recent months. Both these smart phones are definitely one of the best buys now. You can make your pick between the two, depending on your liking, its features and your budget.

If you are looking at both these smart phones objectively, then both phones are equally good in terms of their designing and built. Apple iPhone 5 is not much different from iPhone 4S in terms of its look. With aluminum casing, toughened glass at its top and bottom and less width (58.6mm). Apple iPhone 5 is also thinner and sleeker than its predecessor,which is a good improvement. The only major addition in the designing of iPhone5 is the new connector – Lightning port which has caused a lot of complains as many of the users iPhone 4/4S accessories are becoming irrelevant. 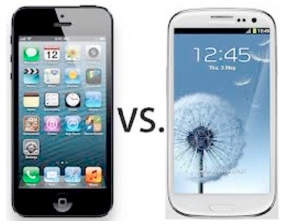 Unlike iPhone 5, Samsung Galaxy S3 has a plastic feel to it. However the plastic look is actually deceptive, as it is manufactured from superior quality materials including durable polycarbonate. With its exclusive Corning Gorilla Glass II on its front side, this smartphone is stunning and nearly indestructible. Samsung GalaxyS3 is however slightly wider than the more compact iPhone 5 with 70.6mm and a bit heavier (133 grams) than iPhone 5 (112 grams). Though there is a slight difference in weight, it is actually insignificant, as both these light-weight smart phones can be easily carried in your pocket. 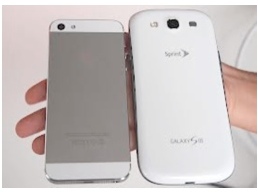 Though both these smartphones offer application stores, settings menu, application lists, etc., there are considerable differences in iOS of iPhone 5 and Samsung Galaxy S3 Android operating system. On the one hand, where iOS has a more locked propriety OS, Android Openness offers a number of features. In fact Samsung Galaxy S3 is packed with so many features, including an in-built task manager that your applications run smoothly in the background, without needing to open them again and again. With special features likes like microSD, 2 GB of RAM and NFC included, Samsung Galaxy S3 is definitely more worthy than iPhone 5 in this department.

Interms of software, Apple iPhone 5 has not made any note worthy improvement than its predecessor. The only thing you can do is move your icons in the desired area and change your ringtones, home screen and backgrounds. Compared to iPhone5, Samsung Galaxy S3 has superior software. With 7 home screens, application icons, customizable widgets (you can also download them) and ringtones and flexibility to change or add animated backgrounds, these are a number of features that the Android offers.

The maps are another department that Apple iPhone 5 needs to improve on. Apple has tried to replace Google Maps with Apple Maps in iPhone 5. However this is turning out to be a disaster. With Samsung Galaxy S3 accessing Google docs, calendar,YouTube, Google Maps, Google search and other features of Google are not at all a problem. 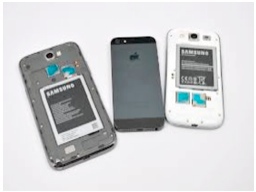 Downloading games, videos and music is not at all a problem with both these smartphones. On the one hand where Apple play God in controlling what applications can be uploaded to their APP Store & installed on their devices, Samsung Galaxy S3 has a massive Android application store while being less restrictive on which applications can be added & what you can installed on your device. This is one point where the Samsung Galaxy S3 is a clear winner.