Lately it seems that Apple with its new iPhone 4S and Samsung with its new Galaxy SII LTE have taken centre stage and are just a couple of the many titans of the smart phone world competing, but they are two of the most popular smart phones out there, and as you know, if it is out there we must review it!

So how does the Samsung Galaxy S2 LTE vs. Apple iPhone 4S play out?

Well speaking strictly ergonomically, the new model of the iPhone is much more compact and light weight than previous models.It is only 115mm x 58mm x 9mm, giving it some leeway over its predecessors, and a squarer look from the iPhone 3, 3Gâ€™s larger shell, yet curved shell… The Samsung Galaxy S2 LTE does beat the new iPhone however, and takes the title for smallest smart phone available. While its length and width are slightly larger than the iPhone, this also allows the phone to have a slightly larger screen,and it still remains thinner and lighter weight. When comparing weight, Samsung Galaxy S2 LTE vs. Apple iPhone 4S, the iPhone weighs in at 140g and the Galaxy is 116g, that is really light in comparison, and allows it to sit in a shirt pocket without the feel of a heavy weight. 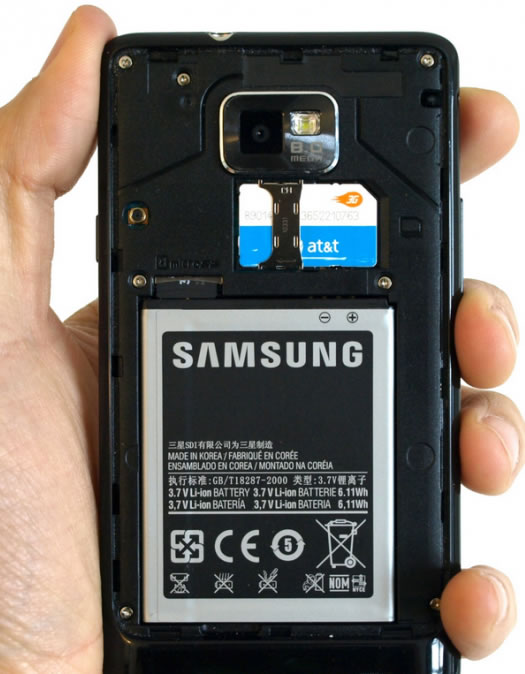 Both phones have very good placement for power and for audio connectors. Both allow good placement of power plug so you can power up the units at home or in the car, and still have easy use of the phone. As well the ever important placement of the audio jack on both units is top and allows to have it in holster so you can easily plug and unplug while in case, with no difficulty. (It surprises me how many other companies make it difficult to plug in and listen to your music).

Samsung uses the now well-known Corning gorilla Glass, a very tough proven technology for display glass, virtually industructable, without having to purchase other screen protection products. The iPhone 4S is using a Chinese manufacturer named Lens Technology, there is claim that the properties of their glass is similar to Corning, I canâ€™t help but wonder about this claim as I have seen many a shattered iPhone displays over the last few years. To be totally unbiased about this, Check out at the bottom of this post a YouTube video that shows the two phones in a drop test, seeing is believing.  if youâ€™re anything like me, (that whoops moment as you see your phone slip from your hand and hit the ground in slow motion), this will happen a few times a year. I donâ€™t know about you, but I have a better comfort level knowing my phone wonâ€™t shatter the first time I drop it!  Sound quality is better on this new Samsung this time around. Talk, speakers on hands free are much better. In comparison with the iPhone 4S the Samsung Galaxy S2 has really stepped up their game.

The Samsung Galaxy S2 LTE processor is simply a faster processor than the Apple iPhone 4S, the processor on the Samsung Galaxy S2 LTE  is a 1.5GHz Dual core with 1GiG of Ram to the iPhones 1GHz dual core with 512K of Ram. Samsung wins again on power. While the Apple iPhone 4S has slightly better graphics due to its GPU. I would not call this GPU speed far superior to the Samsung. In tests the Apple iPhone 4S GPU PowerVR SGX 543MP2 tests better, but the comparison to the Samsung Galaxy S2 LTE ARM Mali 400 may only make a difference to speed freaks that require those extra microseconds of speed who are judging each hardware piece on its own merit, and when you factor in Samsungâ€™s faster CPU and double the Ram, its fast! It allows for very fast game playing, photography and video at 1080 HD. The iPhone 4S comes in several flavours, 16gig, 32gig, and 64gig. This is the maximum amount of storage that you can save to the device in data. The Samsung Galaxy S2 makes it simple. You can buy a 16gig version, that has a microSD card to pump up that storage with up to an extra 32 gig of storage on the phone plus the 16 gig for a total of up to 48gig total storage, not bad, and allows you to control how much ram you need and allows multiple storage advantages of having a microSD cared for each of your files if youâ€™re a heavy user, photographer, video grapher, audiophile and if you have 10,000 mp3 files, you can take them with you in your extra microSDâ€™s, without being forced to buy what you may not need.

The Apple iPhone 4S uses a Li-Po 1432 mAH battery, permanent (non-removable) , while the Samsung Galaxy S2 uses a , Li-Ion 1650 mAH that is removable. The ability to remove that battery is pretty plain, with the Apple iPhone 4S, you are limited to the power of the battery, and it must be charged, and if it breaks, you are stuck with getting a new Apple battery, which means being without your phone while they install it, or at that price, buying a new phone. With the Samsung Galaxy S2, generic replacement or add on batteries are available and very inexpensive, you can buy an extra large battery, to give double power, or if you wish, carry an extra battery with you, if you are having a long day, and think you may need the extra power on the road.

, you are limited tothe power of the battery, and it must be charged, and if it

breaks,you are stuck with getting a new Apple battery, which means being without your phone whilethey install it, or at that price, buying a new phone. With the Samsung Galaxy S2, generic replacementor add on batteries are available and very inexpensive, you can buy an extralarge battery, to give double power, or if you wish, carry an extra battery with you, if you are having a long day, and think you may need the extra power on the road.

The Apple iPhone 4S, which currently is having issues with power loss on its battery at the moment, will experience better battery life, once it has a new software update. At time of publishing this review, the update from iOS 5.0to 5.0.1, as reported by Computerworld Article November 11, 2011, said its readers were posting they still had the same issue or worse still. Assuming the future iPhone 4S next update happens, and works, it should fix the low battery life,currently being experienced on the iPhone 4S, and bring user time up closer to 5.29 working hours. But at this time, posted hours for talk and standby are being challenged by users in forums and blogs, until this issue is fixed, it is serious.

The Apple iPhone has served as a catalyst, leading cell phone design and technology into the world of what we now know to be smart phones. They are no longer just for calls and texting; they’ve become mini personal computers for those of us constantly on the go. Google a few years ago decided to get into the Cellular market developing its own O/S called Android. What a ride it has been for them, and for us as consumers. They did not cower in the shadow of Apple iPhones, they stayed the course, and continued their development, improving on every O/S platform, all the while allowing for other manufactures to get involved and use Google software, with their hardware. Within 2 short years. Google with their Android O/S (Operating System) have taken a major piece of the cellular market and now, As of July 2011, Android has 41.8% of the smart phone market and Apple has 27%. Not bad for a company that only announced in 2007 that it would be developing its own Operating System for Cellular.

We looked at a new feature, Siri and iCloud that Apple has been throwing around as a major feature of their new Apple iPhone 4S. The issue of course is getting these 2 new features to work. Apple says you can talk to your iPhone and ask for directions, and it will give you a map, or tell you the weather, give a definition. In Canada, at the moment, this feature is intermittent, at best. There are many Siri features that are not yet functioning as yet in Canada, and on and off in the U.S. The Apple iCloud is storing content, work and Documentation on the  iCloud, and is a bit glitchy for the moment, and requires more work, and development on Apples part. Being an Android (Google) phone the can connect to Google Docs, tasks, update your calendar and contacts out of the box with very little set up. Voice to text for Google searches. Maps, Texting and email are already working and Android has been working with this kind of technology (Voice & Cloud) and does not require any extra apps to download. Both have 8 MP cameras, with image stabilization, and 1080 video.

On the Rogers Network. The Apple iPhone 4S is available But not available for the LTE network:

On the Rogers Network. The Samsung Galaxy S2 LTE, One of the few smart phones ready for the LTE Rogers System & AT&T in US: 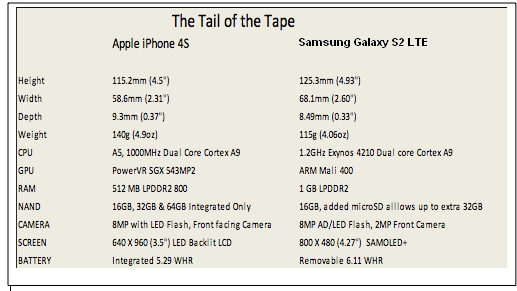 Well, there you have itâ€¦ in the end, it is up to you. I hope we have given you some real insight to all the features and benefits. I think the Samsung Galaxy S2 LTE is the clear winner. Hardware you have a better CPU, more Ram, and great GPU, Amazingly durable shell and screen,ability to remove the battery, or buy extras. microSD cards, you could have separate cards for your music (Mp3â€™s), pictures, videos, data and whatever you may need extra microSD cards for. An O/S that just keeps getting better and better, with voice to text that already is working, Sharing with Google and their cloud system to store and share data, and only the files you wish to share. A large vibrant screen.

At last unfortunately, we still have not implemented our own blog or forum where you can leave your comments and respond to you, though we have agreed with ITComparison.com to host a post for us where we can get your comments and reply to it. You can find the post at: AndroidApps4u: Samsung Galaxy S2 LTE vs Apple iPhone 4S. Please leave your comments on there and we will reply to you as soon as possible. Sorry for the inconvenience.  Let us know what you think with your comments. In the meantime, if you have a comparison or review you would like to see, let us know in the comments area mentioned above, and we will give a full informed review.

Check out our other related Comparisons: