Finally the Nexus one car dock has arrived. I was happy when Google started shipping the Nexus One car dock. It is was an amazingly missing accessories for the Nexus one. It is not just a car holder but a real car dock with plenty of features.

The Nexus One car dock uses bluetooth to communicate with the Nexus One and automatically establishes a connection when the phone is inserted. The Car Home application is then launched with allows the user easy access to Maps and Navigation, Contacts, and Voice Search. Built-in speakers provide music playback and calls using the speakerphone.
From Google:  The Nexus One Car Dock is the perfect place to put your phone when you are in the car. In addition to holding your Nexus One, the car dock also charges your phones battery, it let you use your phone handsfree, and provides easier access to voice and navigation apps.
The docks built-in speakers and volume controls also enhance the in-car music and media experience. And the Car Home app, which loads automatically, makes it easy to access Maps and Navigation, Voice Search, Contacts, and Music.
You can mount the dock on the windshield or dashboard, and it ships with an adhesive disc that lets you attach it to a textured surface as well. The dock comes with a charger to fit into your cars 12V utility socket, and the holder can rotate for flexible orientation.
The only thing I was hoping for Extra is to have an FM modulator, where it will play the music through the car stereo. Though the Car dock speakers are quite sufficient.
Many of you will wonder about certain features of the car dock & what does it support. For that below you will find Google Faqs of the Google Dock Station.

Can I use my phone with a Bluetooth headset while its in the Car Dock?

Yes. When you dock your phone for the first time, youll be prompted with a dialog box to select the docks audio settings. Just uncheck the “As speaker phone” option, and your phone will be able to pair with a Bluetooth headset. To change these settings later, go to Menu > Dock settings while Car Dock is running. 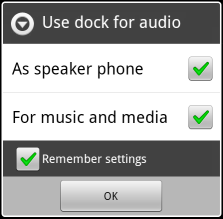 Can I connect my phone to my cars auxiliary jack while using the Car Dock?

Yes. The audio jack at the top of your phone is still functional even when the phone is docked. In this situation, we recommend keeping the “As speaker phone” option enabled so that the docks microphone is used for phone calls, since the phones built-in microphone isnt sensitive enough. Alternatively, you can choose to pair your phone with a Bluetooth headset.

Can I listen to music, turn on Google Navigation and answer calls at the same time?

You can, but only one sound source will play at a time. For example, if listening to music while using Google Navigation, your music will be temporary muted while a driving direction is played.

Can I use my phone with an A2DP compatible Bluetooth device for stereo audio while its in the Car Dock?

Yes. When you dock your phone for the first time, youll be prompted with a dialog box to select the docks audio settings. Just uncheck the “For music and media” option, and your phone will be able to pair with a Bluetooth stereo audio device. To change these settings later, go to Menu >Dock settings while Car Dock is running.

Can I insert another cigarette lighter power source into the dock?

No. The current and voltage ratings might not be the same. Please always use the included adapter.